Volumes might be written, relative to the primitive days in the Four Lake Country, in giving an account of the early scenes enacted, the hardships, trails, toils, and privations of the bold pioneer, but we must leave that for th historian proper, and will only attempt to give, in abbreviated terms, a few of the prominent facts concerning the early settlement, progress, and present prosperity as they are obtained from the records and memory of the old settlers, some of whom survive. This is a difficult task, from the fact that the statements until, with the aid of the Historical Library, we are assured that what we here present is substantially correct.
Only a few years have passed since along the banks of the beautiful lakes of Dane County no white man was to be seen. The broad fields, that to-day present almost every evidence of civilization, were only a short time since traversed in all directions by hers of deer, antelope, etc. All this section of country was the home and favorite hunting-grounds of the Winnebagoes and Sacs, and , as long as possible, they kept the pale face from the same. Through they gave up the mining lands, they clung to the lakes. But the Black Hawk War laid open the lake country to the eye of the white man, and the treaty made soon after with the Winnebagoes, then subdued by fear of the prowess of the whites, returned to their old haunts in search of the game and fish, with which the lands and waters teemed. As these lakes were the favorite hunting and fishing grounds, so they were the burial place of the Indian dead, and many Indian remains have from time to time been exhumed.
Dane County lies in the latitude 43 degrees north, and longitude 89 degrees west from Greenwich. It is bounded on the north by Columbia and Sauk Counties, on the east by Jefferson and Dodge, on the south by Green and Rock, and on the west by Iowa and Sauk Counties. It is 42 miles long, east and west, by 30 miles wide, north and south, with an area of 1235 square miles, 35 of which are covered by water of the lakes.
This county was set off from the west part of Milwaukee and the east part of Iowa Counties in 1836; but was not organized as a separate county until 1839. Its population in 1838 was 172; in 1840 was 314; in 1850 was 16,639; in 1860 was 43,922; in 1870 was 53,096.
The face of the county is beautifully diversified by hills and valleys. The hills, however, are always of moderate elevation and have gentle slopes to their summit. The valley occupied by the Four Lakes, and their outlet, is the principal one, and occupies the central portions of the county. There are no considerable portions that can be called timber land, it being almost entirely oak openings and prairie. Some of the eastern parts of the county are occupied by dry ridges, separated by wet meadows, but the majority of the land in the county is rich and fertile, producing the cereals, corn, wheat, oats, barley, and rye, in abundance. Tobacco and hops are also extensively raised. The marshes yield fine pasturage. 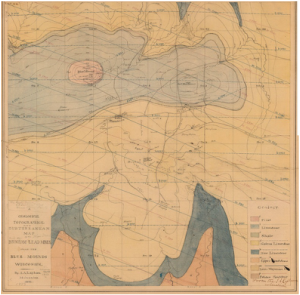