Early Settlers, Land Owners and Residents
Town of Springdale in the Vicinity of Donald Park 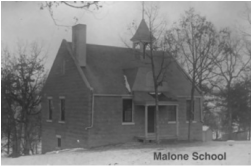 Hotel and Grist Mill- 1890
On Jun 2, 1848 the Commissioners of Common Schools, Thomas B Miles and Wyatt Perkins, set off the boundaries of School District No. 2 in the Town of Springdale (hereafter referred to as Springdale). The boundaries included all of Sections 19-21 and 28-34, making a square 3 miles on a side with a stub of 1 square mile (Section 34) attached. All legal voters were to meet at the house of Martin Nash on Jun 10 at 4pm for the purpose of organizing the district. In 1861 the school board, consisting of Michael Johnson, Director, Horatio N Fargo, Treasurer, and N H Dryden, Clerk, removed 1.5 square miles from the district. On Mar 18, 1861 L D Robbins, Justice of Peace verified the action, which included a map of the original district and the excluded part. It seems that that action was reversed on Jul 3, 1861 due to objections of residents.

The annual reports of the district gave details about the number of school age children and the number that actually attended, the number of months taught, the teacher and wage and the district clerk. Some reports were lost due to storage problems. The first available was for Sep 1, 1852 with 22 students attending out of 33 eligible. Eunice K Corbin taught 3 months and was paid $7.52 per month. N H Dryden was the clerk. The report for Sep 1, 1856 indicated that 32 students attended out of 48 eligible. School was taught 7 months with an average attendance of 4 months. The schoolhouse was of log construction with a value of $10. There was no blackboard. Apparently, land had not been deeded to the school district. A (for Axium) Malone was the clerk. The report for Sep 1, 1857 revealed that 34 students attended out of 53 eligible; the term was 7 months. A new, framed schoolhouse had been completed on one-half acre of land at a cost of $260 and apparently became known as the Malone School. The old schoolhouse was repaired at a cost of $6.99. Nothing was recorded about the disposal of the log structure. William Sweet was the clerk. The annual reports through the years from 1859 to 1910 give the number of students and the number eligible. The number of students were generally around 40 plus or minus, running as low as 36 in 1885 and as high as 71 in 1868. The number eligible ranged between 60 in 1871 and 101 in 1863.

Plat maps for 1861 and 1873 show the location of the framed schoolhouse to be on Ole T Thompson land, just north of the Axium Malone farm. The schoolhouse was situated on the SW Corner of the NWNW Quarter of Section 29 immediately west of what is now Highway 92. The 1873 map shows the Malone farmhouse just south of the school.

Construction of a new schoolhouse began in the fall of 1907. It was built of stone and was dedicated in early Apr 1908. It was still called the Malone School. On Sep 21, 1907 E Donald Jones of the Town of Springdale sold one acre of her land to School District No. 2 for $50. The land was described as commencing at the center of the Mt Vernon-Mt Horeb Highway 16 rods east of the of the NW Corner of the NESW Quarter of Section 29, thence east 16 rods, thence southerly 8 rods, thence westerly 12 rods to the center of the above named highway, thence in a northwesterly direction along the centerline of said highway 14 rods to the place of beginning. This new location was just a little over ½ mile SSW of the old site and on the opposite side of the highway. The old schoolhouse and site were to be sold Mar 26, 1908; it was a framed structure 20X24 feet, one story high, and situated on ½ acre of land. The school district closed in 1962 and the property was sold to a private party and is used as a residence.

The school district map of Mar 1861 does not show Section 34 and only shows the NW Quarter of Section 33. There must have been a change to the boundaries before 1861.

The school district map of 1861 shows some inconsistencies in household names and road locations with the official Springdale plat map of 1861. On the school map, the present Town Hall Road ran straight north from the Mt Vernon-Mt Horeb highway about 1/16th of a mile east of that on the 1861 official amp, making Carl Krause’s house to the west of the road instead of to the east. The Mt Vernon-Mt Horeb highway was sketched straight in running across Sections 19 and 20 instead of jogging to the east. The official map shows a road running northeast from the main highway from the NENE Quarter of Section 19 into the NW corner of Section 20. That does not show on the school district map.

(See our web page on Malone School)
The Mt. Horeb Area Historical Society controls copyrights to the images on this site.
For permission to use these images please call 608.437.6486 or email mthorebmuseum@mhtc.net