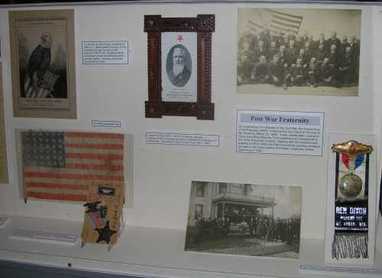 From MHAHS Museum exhibit
By the mid-1850s foreign born immigrants from Germany, Norway, Scotland, Ireland, and Switzerland looking for new opportunity rapidly settled southwestern Dane County. Many of these newcomers were fleeing oppression, poverty, overcrowding and continual wars in their native countries. In 1861, when America entered into the American Civil War, this immigration slowed to a trickle for the duration of the War. Those already here faced a new moral challenges as the War ratcheted up and a draft was instated. As C. O. Ruste wrote in 1914 of his concerns: “It has sometimes been said that the citizens of foreign birth are slow to acquire patriotic love and loyalty to their adopted land, but as we think of our fathers, uncles and brothers….some of them still wearing “the home-spun from Norway,” as see them march even unto the cannon’s mouth an bayonet charge, any comment by us on the above assertion becomes superfluous.”

Wisconsin raised 91,379 soldiers for the Union Army and organized these soldiers into 53 infantry regiments. Approximately 1 in 9 residents (regardless of age, sex, or qualification for service) served in the army. In addition, Wisconsin was the only state to organize replacements for troops that had already been fielded, leading northern generals to prefer having some regiments from the state under their command.

Each town’s assessor was assigned to gather a list of men, ages 18-45, healthy enough to fight. There were limited options for men to skip the draft, such as one Springdale man did by paying $300 to avoid serving. Some local boys embraced the idea of defending their new homeland, while others resisted because of religious beliefs, moral opposition or painful memories of homeland experiences.

Because many of Wisconsin’s residents still spoke their native languages several of the state’s regiments were made up of individuals with like dialects and among these were German, Irish and Norwegian speaking units.

Like any conflict of this scope patriotism as well as opposition accompanied the war. In the newly established community of Mount Horeb a flag pole was erected in the cemetery of the crossroads town and received the Norwegian name “Staage” or “Stangjii,” a dialect name for Liberty Pole. George Wright, the man who gave the community its name, served as assistant provost marshal during the Civil War. Wisconsin’s women formed aid societies to assist with wrapping bandages, gathering supplies and moral support for the soldiers and the war effort. However, riots occurred in several parts of Wisconsin. In West Bend the draft commissioner was beaten bloody and chased from the scene by opponents.

Following the war a Grand Army of the Republic (GAR) post was established that consisted of local men who had served in the war. However, by the 1930s the last of its members passed away. Many of the remembrances of the war were left to mere mentions in local histories, with the 1961 History of Mount Horeb barely noting the event. In 1900 a Civil War cannon was purchased for the local park but no memorial to those who had served was established. In the 1980s the last Civil War relics brought back by local soldiers were sold off to raise money for remodeling the American Legion building.

Throughout its existence the Mount Horeb Area Historical Society has collected the history of the Civil War as it was experienced by the area’s citizens. It has mounted a museum exhibit that tells the stories of local ethnic reaction to the war and post war experiences and has launched this web site to pay due honor to those that served. If you have additions or corrections we encourage your comment.
ONLINE ACCESS
The following lists contain name, alternate names, rank, date of enlistment, date of end of service, home residence, regiment, company, and if they died in service. They can be accessed alphabetically by last name or by their home residence, or from the American Legion Post 113's book. You can also use the "Search" function at the top right part of our header to find a specific soldier, regiment, etc. Be aware that spellings differ so using partial names/words will retrieve the most results. These lists are not necessarily accurate or complete but are what we have been able to collect with the given resources. See these resources below*.
Note: Some of the names appear more than once if they changed regiments. See table of statistics below.
1. Alphbetical Lists of our Soldiers: A B C DE FG HI JK L MN OPQ R S TUV WZ
2. Home residence of soldiers by townships (when known) - Blue Mounds, Cross Plains, Perry, Primrose, Springdale, Vermont, Verona, and by settlements - Mount Horeb, Mount Vernon, and Pine Bluff.
3. List from The Service Record Book of Men and Women of Mt. Horeb, Wis. and Community by American Legion Post 113. (see below for access to entire book)
Visit our Research Center to access our collection of Civil War papers, photographs, artifacts and completely searchable database.
STATISTICS and REGIMENTAL HISTORIES
1. Total number of unique names we found - 610 of which 92 were noted as dying in service either from wounds or disease. Wisconsin's death rate was 13% as opposed to our area's 15.1%. The 1860's census shows our area with 3573 men. Our 596 soldiers amounted to over 16.7% of our total population of males.
Number of Soldiers from each home residence:
2. Total number of regiments - 52. Regiments with more than 9 members from our area including the 15th WIS Infantry also known as the "Norwegian Regiment" and the 8th WIS Infantry whose mascot was "Old Abe".
Click on the regiment for detailed descriptions from The Military History of Wisconsin, E.B. Quiner, 1866.
3. Earliest enlistment Aug. 15, 1862.
*RESOURCES:
Additional offsite information on our area's participation in the Civil War can be found in these resources.
The Mt. Horeb Area Historical Society controls copyrights to the images on this site.
For permission to use these images please call 608.437.6486 or email mthorebmuseum@mhtc.net