"Life & CHange at the edge of the Driftless"​​
EXHIBIT  SPONSORSHIP​  OPPORTUNITIES​ 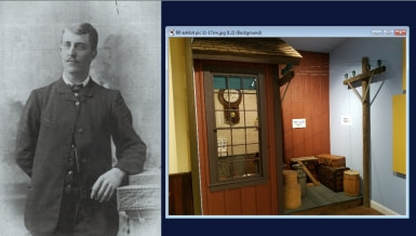 In accordance with the associated “33 Ways to Help” fundraising campaign, Schwenn’s donation entitles him to naming rights for one of three central exhibit vignettes. Schwenn chose the vignette celebrating and exploring the area’s significant railway and telegraph history.

John’s donation honors his grandfather Henry H. Tinkham who worked for the Chicago and Northwestern Railroad for 58 years, from 1881 until 1932, first in the shops, then as a locomotive fireman and finally for 51 years as an engineer. Tinkham resided in Baraboo for 58 years, but moved to Mount Horeb in 1946, where he lived with his daughter Ruth Schwenn and husband Mike until his death here in 1957.

Tinkham logged more than two million miles of track without having a serious accident over the course of his career. In 1898, when Tinkham was 36, he made a record setting run from Jefferson Junction to Elroy (105 miles) in two hours and seven minutes, averaging over a mile per minute in some portions of the run. He was a continuous member of the Brotherhood of Locomotive Engineers for over 60 years.

The railroad and telegraph exhibit will depict the importance of the railroad in the growth and development of Mount Horeb and the surrounding area. Local artifacts from the Society collection will combine with modern technology to make the vignette come alive for visitors. For instance, visitors will be use a keyboard to type in their own message and then hear it tapped out in Morse code via a telegraph key—just as it would have sounded coming from the telegraph during Mr. Tinkham’s storied railroad career!
The Mt. Horeb Area Historical Society controls copyrights to the images on this site.
For permission to use these images please call 608.437.6486 or email mthorebmuseum@mhtc.net