​The Mount Horeb Area Historical Society collects, preserves and makes accessible the physical remnants of the human and natural history of the Mount Horeb area for the purpose of sharing the broader histories and prehistories of America through this localized lens. 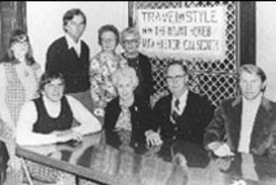 ​The Mount Horeb Area Historical Society was founded in 1975 by a dedicated group of area volunteers and later that year became an affiliate of the Wisconsin Historical Society. In 1977, the Village of Mount Horeb offered space on the third floor of the Municipal Building on Main Street for a small museum and artifact storage. The Society began carefully collecting and preserving artifacts, paper records and photographs with which to tell the story of the lives and landscape of Southwestern Dane County. 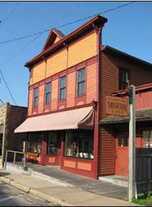 In 1996, the Society purchased the Gilbertson Building, a two-story 1890's building on South Second Street in Mount Horeb. The exterior of the building was renovated to its original Victorian appearance and the 4,600 square foot interior was remodeled to accommodate a small museum, gift shop and office space. Thanks to the generosity of the Village of Mount Horeb, the Society was not only able to pay off the loan for the museum building, but also continue using the third floor of the Municipal Building for artifact and archival storage.

The new museum was an immediate success and became part of southwest Wisconsin's well-known heritage tourism. In 1998, the Wisconsin Historical Society (WHS) awarded MHAHS Board President Brian Bigler the Award of Merit for Outstanding Achievement in the Preservation of Local History. And in 2001, the Mount Horeb Area Museum was awarded the Rueben Gold Thwaites Trophy for Excellence in Local History by the WHS.

By the 2000s, expanding collections and a desire for in-house programming space prompted the Society to explore expansion options. After several years of planning and a significant amount of support from individuals, businesses and organizations in the Mount Horeb area, the Society began construction of a three-building history center on South Second Street in Mount Horeb.
​
The new facility—named the Driftless Historium in honor of our location at the edge of this unique part of Wisconsin—was opened to the public in June of 2017. Adding on to the Gilbertson Building, the expanded facility houses a museum, gift shop, research room, programming space, special exhibit space, and storage for the Society’s extensive archival and objects collections. The following year, the Society opened a major permanent exhibit, “Life and Change at the Edge of the Driftless,” which explores the ever-changing relationship between the people, the communities, and the landscape of the Driftless region of Southwestern Dane County. That same summer, after over 40 years of village-provided space and utilities, the Society completed the meticulous process of moving our collections from the Mount Horeb Municipal Building to the Driftless Historium.
The Mt. Horeb Area Historical Society controls copyrights to the images on this site.
For permission to use these images please call 608.437.6486 or email mthorebmuseum@mhtc.net